Posted on September 7, 2017 by Hector Beltran under General
Leave a comment 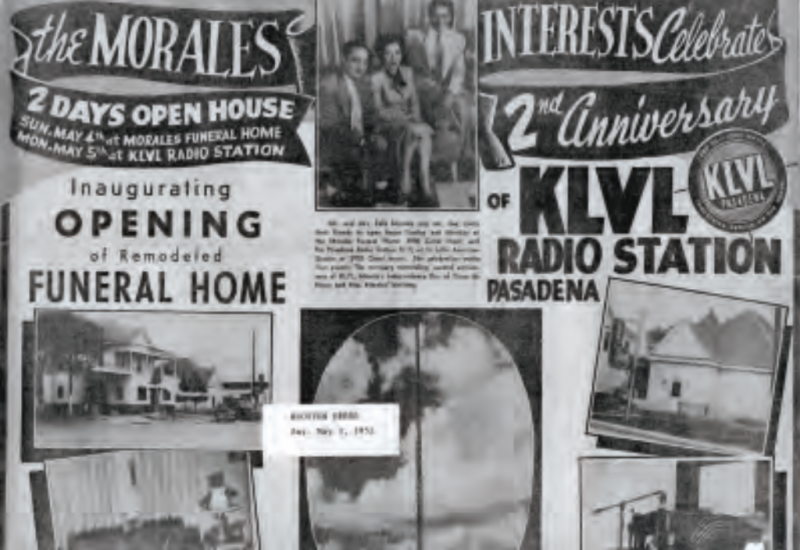 KLVL was founded in 1946 by the family of Felix Hessbrook Morales (1907-1988), an entrepreneur, radio personality, and civic leader. He previously hosted his own radio show at a San Antonio station and was poised to own a radio station, but the FCC soon ruled that radio stations could not sublet time to outside purchasers. Prior to that, Morales applied for an application in 1942, however, due to World War II, it was delayed until 1946 and the permit was not granted until four years later. Within Houston and the Texas Gulf Coast, it was the first Spanish language radio station that provided educational programs, music, and news. KLVL sponsored fundraising and job seeking programs.

KLVL then officially went on the air on May 5, 1950, to celebrate both Cinco de Mayo and his wife, Angeline Vera Morales’ birthday. During the first few years of broadcasting, it was a daytimer station, but the permit was eventually extended to authorize a 24/7 broadcasting operation. In 1954, after flooding devastated the Rio Grande Valley, the station started a campaign to obtain clothing and necessity goods for the flood victims.

Felix H. nMorales passed on in 1988, leaving KLVL to his wife Angeline in whole. For the next decade, KLVL would carry on as “The Latin Voice” in honor of Morales’ legacy in Houston’s Hispanic radio community. KLVL was family owned and operated by the Morales family until 1997 when they sold the station to Gabriel Arango’s Siga Broadcasting of Houston, after the death of Angeline Morales.