Posted on July 24, 2018 by Hector Beltran under Community Happenings, General
Leave a comment 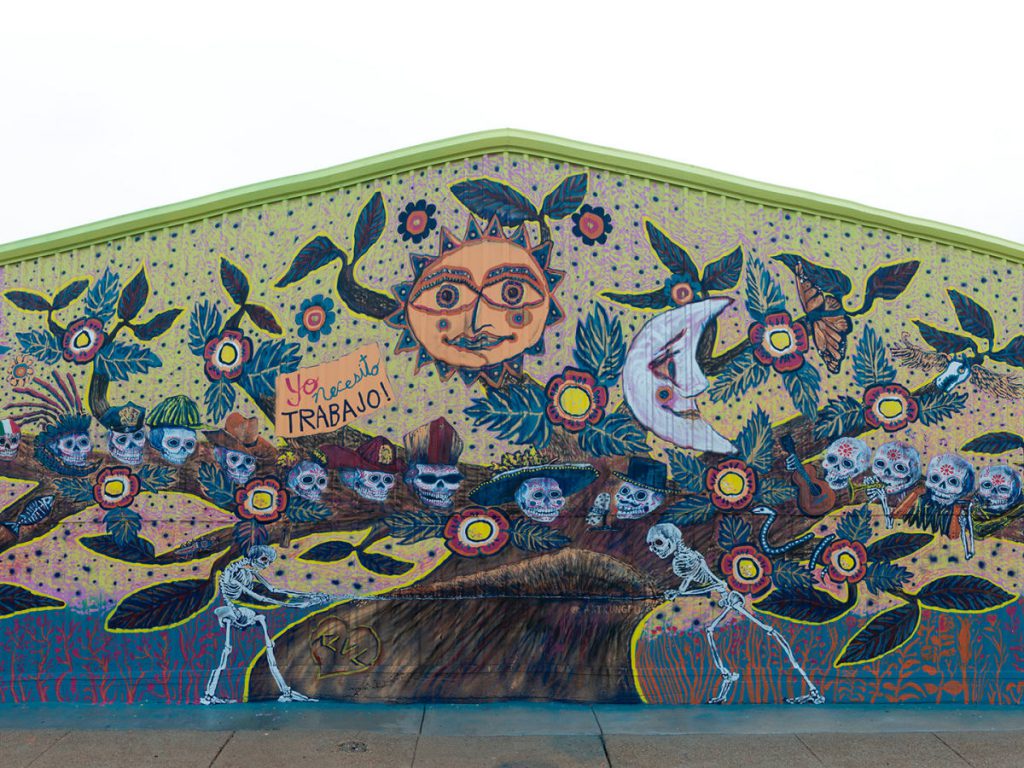 A panorama of the Muertos Mural. Photo by Lou Vest

Houston’s EaDo crowd has a new conversation piece that’s sure to fire up lengthy dissertations on gentrification in the area, thanks to a new mural by local artist Angel Quesada.

Quesada, who also goes by the moniker ARTKUNGFU, has just completed a large piece called Muertos Mural, which he says “celebrates the culture and traditions of the East End and the historical Second Ward neighborhood using life and death as its theme.” The large-scale work, which is now emblazoned on the Morales Radio Hall, located at 111 N. Ennis St., plays on life and death for a very pointed reason, he says.

“Many Mexican-American families have made their homes here in the East End since the ’20s,” he notes. “They built businesses, they built homes. But now new people are looking to cash in on the cheap real estate. It’s a new frontier because everyone wants to live near the urban core. And the original families are being displaced. In some ways as the neighborhood is growing, it’s also dying.” The artist created the mural as a nod to rural pueblos throughout Mexico, especially in the Oaxacan region. In this mural, Quesada takes a Dia de los Muertos theme and gives it a tongue-in-cheek twist.

He says understands why people are moving in for the lifestyle and even the view. “My own new neighbors asked me to trim my tree so they could have a better view of downtown,” he says. “But what will happen to the culture here? It’s not lofts or even visual art. Culture is the tradition and language and behaviors that families pass on.”So as the townhomes go up, Quesada says he wants to make sure the original families in the East End are remembered as they leave or die out. “I’m responding to the culture being erased,” he says. “It’s like a flag on the moon. It says, ‘We were here.’”